JCOM Reader, a blog devoted to news and reviews from Barsoom, Mongo & other planets, has a nice balanced review of John Carter: World of Mars #3, the third chapter in Marvel’s new four-issue comic book series that is the prequel, not to the original John Carter of Mars novels penned by Edgar Rice Burroughs, but to the long-awaited forthcoming Disney film John Carter (March 9th, 2012). 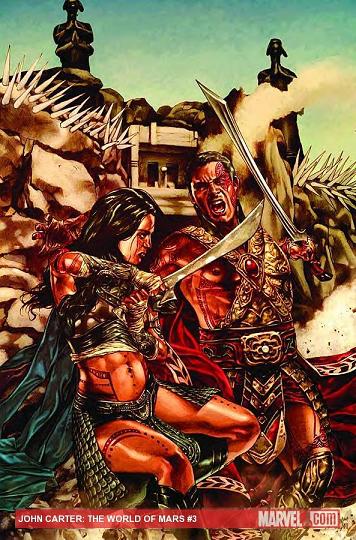 The thrilling prequel to the Disney adaptation of John Carter: World of Mars continues! Taken prisoner in an underground city controlled by the Warhoon, Dejah Thoris, the Princess of Mars, is forced into an arena to fight for her life! And the only person who can possibly save her is a man who is her sworn enemy.
Set on Barsoom in the centuries before the arrival of John Carter, the John Carter: World of Mars comic book series has the full support and cooperation of Disney, and is just one offensive in a colossal Barsoomian comic book battle between Marvel and its rival Dynamite Comics.
Posted by Paul Twinz at 11:19 PM

Email ThisBlogThis!Share to TwitterShare to FacebookShare to Pinterest
Labels: Comics and Graphic Novels