Military science fiction fans who are not afraid to read a self-published novel should consider The Queen’s Martian Rifles, an alternate Steampunk adventure written by British Cold War warrior M.E. Brines that was released as an ebook in November 2011. Here’s the extended description:

Does the secret to the origin of Mankind lie within the Great Pyramid of Mars?
In this alternate steampunk adventure, the technical genius, Nikola Tesla, invented an anti-gravity coil that made steam-powered spaceships possible in the last decades of the 19th century. By 1899 the British Empire not only covers much of Africa, North America, Asia and the Pacific but also includes a moon base and a protectorate with the French over the backward civilization native to the planet Mars. But that empire, and those of the other western colonial powers have powerful extraterrestrial enemies no one even suspects exist -- enemies that have renewed an age-old secret war against Humanity using all the supernatural powers at their command. 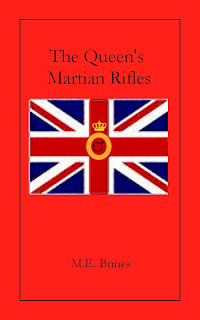 The cast of characters is sprinkled with historical personalities such as Aleister Crowley, the famous occultist history remembers as “the wickedest man who ever lived,” and Viscount Sir James Bryce, British statesman, author, world traveler and mountaineer who claimed to have discovered Noah’s Ark on a mountain in eastern Turkey.
His granddaughter, Lady Rebecca Bryce, is a militant suffragette and unorthodox scholar of antiquities determined to search the Martian pyramids of Cydonia for evidence of her theories on the extraterrestrial origin of human civilization. An educated and intelligent woman in a world that relegates females to insipid garden parties, she yearns to “set the male dominated science of archeology on its head.” She doesn’t believe she needs a man to fulfill her. But will she discover on Mars what she really needs?
Recent college graduate David Mclaughlin wants to make a real difference in the world, not just “host tea parties for old ladies.” So he abandons his parents’ plans for him to become a clergyman and seeks adventure as an officer in the Queen’s Martian Rifle regiment. But snubbed and scorned by his “betters,” can David persevere and save the Earth from destruction?
We also meet little Din, David’s personal servant and a member of the Martian Untouchable caste. His clan has patiently suffered in slavery awaiting a promised savior. But after more than three millennia, has God forgotten them?
Can Aleister bring down Western Civilization? Who are the Ascended Masters? What really happened to Atlantis?
You can read about the first 20% of The Queen’s Martian Rifles for free through Smashwords!
Posted by Paul Twinz at 12:46 AM

Email ThisBlogThis!Share to TwitterShare to FacebookShare to Pinterest
Labels: Novels