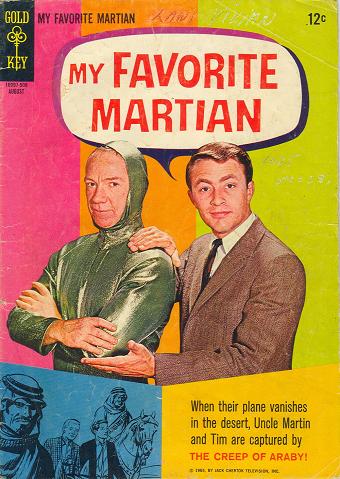 Thanks to an anonymous fan, I recently downloaded all nine issues of the Gold Key comic book adaptation of the classic 1960’s television sitcom My Favorite Martian, starring Bill Bixby and Ray Walston. One of the more interesting issues is #5 (August 1965), in which Tim and Uncle Martin encounter “The Creep of Araby.”

Tim O'Hara prepares to interview the sultan of a remote Mid-Eastern country.

Thanks to Uncle Martin's molecular duplicator camera, they land safely in the desert...

But they are quickly captured and held for ransom by the Creep of Araby!

Thanks to Uncle Martin's molecular duplicator camera, they escape on horseback!

The last time Uncle Martin rode a horse was with Paul Revere back in 1775...