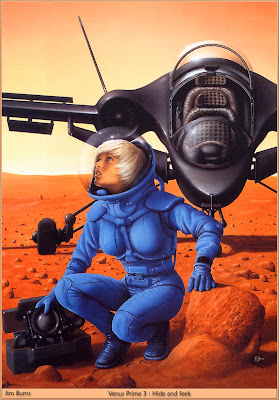 Her code name is Sparta. Her beauty veils a mysterious past and abilities of superhuman dimension, the product of advanced biotechnology.
At long last, evidence of extraterrestrial life has been found. And when the theft of the alien artifact, the Martian plaque, leads to two murders in Labyrinth City, Sparta must risk her life—and her identity—to solve the case.
As the mystery unravels, the investigation becomes a race across the stars to retrieve the plaque, a quest which will ultimately uncover more than Earth’s best scientists have discovered!
According to Greetings, Carbon-Based Bipeds! Collected Essays, 1934-1998 (2000), by Arthur C. Clarke and edited by Ian T. Macauley, Clarke agreed to the Venus Prime project only after reading some of Preuss’s “excellent fiction (and nonfiction).”

Email ThisBlogThis!Share to TwitterShare to FacebookShare to Pinterest
Labels: Novels